Mobile phone radiation is a possible cancer risk: WHO 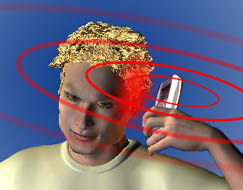 Major review places mobile phones alongside DDT and chloroform
The International Agency for Research on Cancer (IARC), a research group of the World health Organisation (WHO), has classified mobile phones as a possible cancer risk.
For years, advocacy groups have raised concerns about health risks posed by mobile phones. They cited a possible connection between excessive phone use and glioma, a fatal brain tumour. However, studies in the past could not establish health risks cause by mobile phone usage.
Now the research, which is considered a major review, has found that radiation from mobile phones are "possibly carcinogenic to humans."
The IARC announced the classification after an eight-day meeting in Lyon, France. The research group said that experts "reached this classification based on review of the human evidence coming from epidemiological studies."
The studies were assessed by 31 scientists from 14 countries. The findings could make the UN health body reconsider its guidelines on mobile phones, the scientists said.
The new classification puts mobile phone use in the same broad category as lead, DDT, chloroform, gasoline engine exhaust and coffee. Alcoholic drinks and night shift work are also on the 'carcinogen' list.
President of the work group and a scientist at the University of Southern California Jonathan Samet referred to rising cases of glioma, while making the announcement.
Samet said, "The conclusion means that there could be some risk, and therefore we need to keep a close watch for a link between cellphones and cancer."
Two studies showed a higher risk "in those that had the most intensive use of such phones," he said.
However, Sammet added that long-term effects of mobile phones are unknown.
"We simply don't know what might happen as people use their phones over longer time periods, possibly over a lifetime," Samet said.
In the study, the UK was represented by Simon Mann from the Health Protection Agency's Centre for Radiation, Chemicals and Environmental Hazards in Oxfordshire.
Hardware y Software