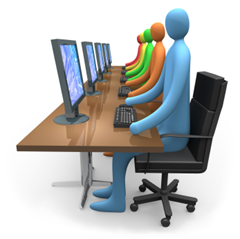 Hardware y Software
Netherlands registered highest average engagement at 31.3 hours per person
The number of unique visitors who went online in Europe reached 365.3 million in April 2011 with an average of 24.2 hours per person online, according to a study by comScore.
The study was conducted in 18 markets of European region. It revealed that among the markets, Netherlands registered the highest average engagement at 31.3 hours per person, 30% higher than the collective Europe average.
Google sites topped the European Web property in April by attracting 329.8 million unique visitors and reaching 90.3% of the total European Internet audience.
Microsoft sites stood second with 269.3 million visitors (73.7% reach), followed by Facebook.com with 236.9 million visitors (64.9% reach).
The study revealed that social networks continue to drive engagement among Europeans, with Russian social network VKontakte registering the highest average engagement among the top 30 properties. In April, visitors spent an average of 494.9 minutes or 8.2 hours on the site, representing a 22% increase from the previous month.
Russian Mail.ru Group ranked second at 293.9 minutes or 4.9 hours, followed by Facebook.com with an average of 283.6 minutes or 4.7 hours.
comScore said that in April 2011, the number of European users visiting the Travel category grew 11% in the past year, while Travel properties, which include online travel agents and accommodation sites, penetrated 44% of the European internet audience.
The UK continued to lead European markets in Travel category penetration at 66.5%, up 8 percentage points from a year ago.
Ireland and Spain also registered high penetration rates with 58.7% and 57.3% reach, respectively.
The research firm said that Expedia, which includes TripAdvisor Sites, Expedia Sites, and Hotels.com Sites, had most unique visitors in April 2011 with 21.7 million.
Hardware y Software